Things I Want to Pass Along

I’m really digging the songs by A.A. Bondy right now. There is a video of him singing When the Devil’s Loose here. He reminds me of Dylan, big time. And, guess what? He grew up in Birmingham, Alabama. If you like the linked song, you’ll probably love I Can See the Pines are Dancing. He did a whole live session at hearya that included both songs. So, you know, head on over there and get some free mp3s — if you are so inclined.

In cooking lately, I’ve been making lots of chicken. Particularly, I’ve been making cajun chicken sandwiches and a cajun chicken pasta dish. For this, I really have to recommend the Louisiana Cajun Seasoning from Spice Islands. It is the best seasoning spice mix that does not contain MSG out there. So many times, folks just get the heat of cajun spice and miss the other flavors that are just as important. Spice Islands gets it just right with a definite (but subtle) kick of heat with good layered flavors, too. Usually, I make all of my own spice blends because of frugality and also because we’ve got a major MSG intolerance in the family, but, I’m not even tempted to make my own cajun mix because the one from Spice Islands is so good.

There is a fun little website that I visit often and I thought I should tell y’all — you might like it, too. It is actually a flickr page of a girl who photographs her outfits every day. Now, the thing that is cool about it is that she thrifts most of her outfits. She lists the sources of all of her clothing. And, let me tell y’all, not only is she a layering ninja, she also does a fabulous job pulling all of her looks together in really creative but not out-there ways and she’s a color genius, to boot. It is just fun to click over there for a few seconds every morning and see what she has on. I find her inspiring. Now, I’m not inspired enough to wear a dress or weird/cool funky jewelry or to change out of my jeans — but we know who bears the fault for that, right?

Finally, my youngest son has been particularly hilarious lately. He is an out-of-the-blue boy. Also, he is the only son of mine who cannot yet read enough to object to me mentioning him often on this little blog of mine — and so here we go again with E.

First, I must mention this artwork which was done by him recently. 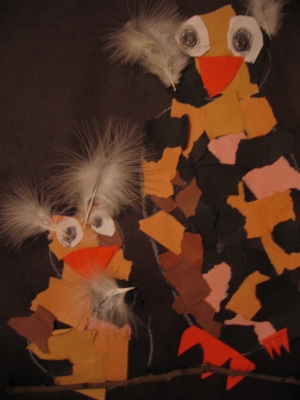 I love it and reflexively get a goofy smile on my face every time I look at it.

This little boy is hilarious. Tonight, I was listening to the birds at the end of the day through my open kitchen window. I asked him to listen with me.

He said (wistfully, with a sigh), “Wouldn’t it be cool to talk to a bird?”
I nodded and said, “Yes, that would be great.”
He then got an inspired look on his face and excitedly whispered, “Maybe sign language!”
(The look he had at this moment was just priceless — he really BELIEVED that he would be able to communicate with birds by signing to them.)
Then he tried to use his made up sign language to talk to birds for at least 5 minutes. He stood there and flapped his arms out the window.
Don’t you just love how many things are possible in a 6 year-old’s world?

Later in the evening, I told him to comb his freshly washed hair. He was brushing it straight back, a la Humphrey Bogart. I said, “What a good looking forehead.” He responded enthusiastically, “And an even better fivehead! What about a sixhead?”

Everyday, lately, he has professed to being a Ka-Ka-Ka-Coo-Coo bird. I find out new things about his made-up animal every day. For instance, we Ka-Ka-Ka-Coo-Coos inhabit a land called NorGinia. Good to know.

Finally, tonight, he was surprised to learn that boxer shorts came in other patterns than the plaids that he usually sports. Jon told him that he (Jon) even had some boxers with elephants on them. E insisted on seeing these for himself. When he did, do you know what he said? “Whoa, those are prehistoric!!”

Have a great Wednesday, y’all.
(Yikes, how can it be Wednesday, already?)