Shyness…What’s That?
This last boy of mine. I tell you, he’s one of those people who’ve never met a stranger. There are no strangers in his world.

Recently, we were at the pet store picking up turtle food, and he nearly scared a lady to death. She was sitting in her car, waiting for someone to come out of the store. We were walking by on our way to our van when he said “Hey, lady, are you here to get food for your pets?” After she peeled herself off the ceiling of her car and recovered her power of speech, he and she had a nice conversation about animals in general and pets, too. They parted new friends.

So, I shouldn’t be surprised when he talks to everyone like he does.

Today, we had just entered the grocery store. I was forging ahead to the deli to get our weekend turkey and salami (for him, he claims to be a carnivorous bird/marsupial/velociraptor/mammal) when I heard him talking behind me. Now, just to illustrate the fearlessness, or you could say craziness, of my son, this man he was engaging in a conversation looked like a giant to me and I was standing 30 feet from him. We’re talking 6’8″ at least and hefty, too. My son was completely unconcerned about the stature of the man. He apparently had a very important question for this guy. He said, “Hey, what do you think about my NEW SHARP TEETH?” Then he pointed energetically as the giant bent over from his great height to check out my son’s new choppers. 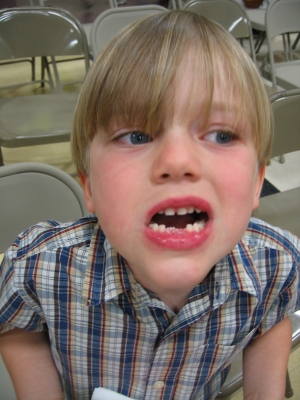 These folks that I take out in public with me….they’re interesting.