Joan Collins, Not
Well, of course, summer is here and we Barlows have been hitting the pool every single day. This has helped my sanity, mostly. Of course, there was that one day when the lifeguards had to go all Baywatch on my oldest son. He was fine.

The moral to that story is not to pack all of your panic away for later. Let that stuff out as soon as you get home and have a glass of wine…or two. This is what wine is for, y’all.

Okay, but the thing I wanted to talk about here was hats. Actually, one hat. See, I know that I may have mentioned it here before, but I have quite a few freckles. Now, if you go out in the sun a lot, you get even more freckles. This happens through a high spf sunscreen, too. Freckles will not be stymied, truly. They come no matter what. So, the only solution besides slathering yourself with pancake makeup (this method works, I know because I tried it in high school) is to get a good hat.

So I tried. Now, baseball caps will not work. Do you know why? Because the lower half of the face gets more freckles than the upper. Why is this a problem?

Earlier this summer, I thought that I had found the hat. It had a wide brim. It was on sale. It was the same color as my bathing suit. 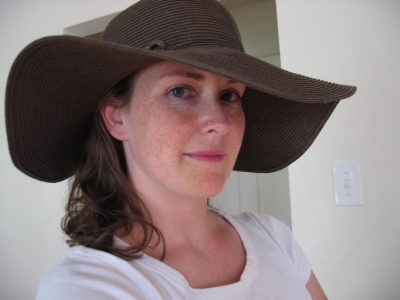 First off, the brim was floppy — very, very I-have-to-tilt-my-head-in-order-to-see floppy.

Secondly, the hat was actually too big. This is amazing for me since it was the first hat that I had ever put on my head that was too large. I come from large cranium-ed people. Except for my Mom…she has a dainty little head and dainty little ears, too. After I had my large-headed oldest son (15 inches was his head circumference!) my prayers regarding my second while in utero went something like, “And, please, Dear Lord, let him get his head size from Mama Suzie…”

Thirdly, the hat, when worn with my suit, sort of throws off a bit of a glamorous image that I’ll have to admit just doesn’t fit with me. You know, sort of Joan Collins minus the diamonds and red lipstick and the Joan Collins and well, you get the picture.

So, the hat went back. My plan now is to sit under a tree.

But, before I retuned it, we had some fun called put on Mommy’s hat and say cheese.

I just love this one with the Xbox controller. Really sets the whole thing off, don’t you think? 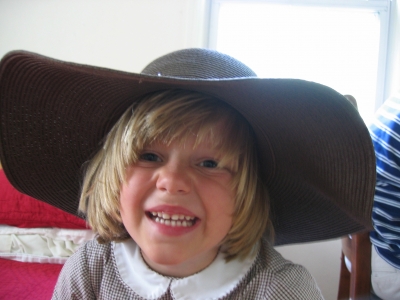 While I snapped this shot he was saying, “Mommy, I just love dis hat!” Okay. 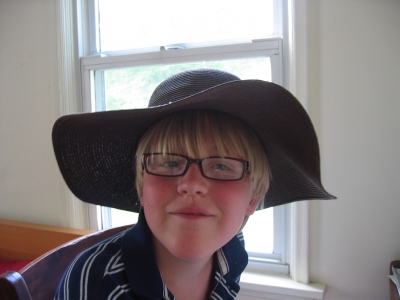 this one turned away from the computer so that I could take his picture. He’s used to the craziness he gets from me, poor thing, and so he just went with it.

And, that is the saga of the hat, 2009. The search has not been abandoned, but I sort of don’t care if I find one now.

What are a few thousand more freckles, anyway?