How I Met My Valentine
I’m walking down memory lane today. Would you like to join me?
Let’s start with a picture. Here we are. This was taken the second time we met. 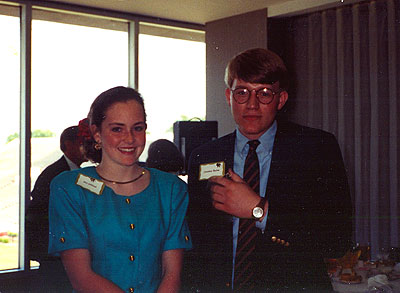 I love to know how people, couples, met. It is always so interesting — even if it’s “well, we were best friends first” or “we met at RUF” or “we were high school sweethearts”. Awww. That is all very nice.

Our story was a bit different.

I met Jon at the interviews for a college scholarship. It was the scholarship for this university. So, even getting an interview for it was a big deal. I think that there were like 12 students interviewing for 5 scholarships. After the interview, all of the parents and students then had a luncheon with all of the big wigs at the university (the members of the scholarship committee) in one of the ballrooms. At the luncheon there were 12 tables, one student per table with his or her family and 3 or so members of the scholarship committee. Only at our table, it was my mother and father and me and Jon — because he had forgotten to invite his family. Whoever assigned the seating put him with us.

It was a nice luncheon. All of my nervousness for the day was just about over, and I was starting to enjoy myself and actually begin to take in everything that was happening when the conversation at the table turned to politics. Specifically, the Anita Hill and Clarence Thomas hearings. (How’s that for dating myself?) Oh my. I should mention here that my dear father is a yellow-dog democrat. And, he has a way of just saying whatever it is that he is thinking. So he gave his version of what he thought about the hearings. When my father makes statements about politics, they are in the same tone of voice and manner of speaking as he would use to talk about the weather. I don’t think that he dreamed that anyone would challenge him. Did I mention that Jon is a conservative? Shall we say a red-blooded Elephant Republican? Before we knew it, a very spirited debate was raging at our table. My mother was kicking my Dad under the table to try to get him to be quiet and eyeing me with a “Oh, my goodness, can you believe that he is talking about this?!!!” kind of look. Meanwhile, Jon was toeing the line against my Dad and not giving in an inch. The scholarship committee members were looking very interested and a little amused at the turn of events at our table. I remember that their eyes sort of went from my Dad to Jon and then back to my Dad — kind of like spectators at a tennis match. Finally, after much debate and points and counterpoints between Jon and my Dad, they at last decided to agree to disagree.

Later, on the way back to Alabama, my Mom was giving her ideas about the happenings of the day, and she said that she didn’t know who else would be getting the scholarship, but that she was pretty sure that I would get it, “and that little Jonathan, too. He definitely will.” Even my Dad agreed that while Jon was, of course, completely mistaken about politics, that he was a very nice young man.

Isn’t it weird that I met my husband at the very same time as my parents?

Later, that spring, we both did receive the scholarship (my mother was right) and were invited back for an awards luncheon. That’s where the above picture was taken.

So, thank you, unknown person who sat Jon at my table. Thank you.

And, Jon, thank you for forgetting to invite your parents.