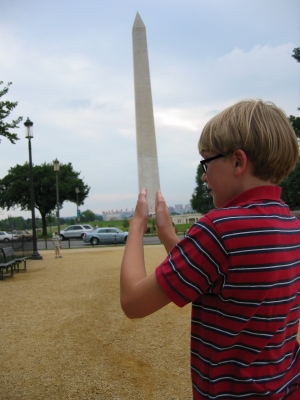 As I mentioned in the last post, our family recently returned from a trip to Washington D.C. My dad, Judge Joe, had a conference up there and so my parents invited us to join them there for a week.

We had so much fun.

Did you know that D.C. is far from St. Louis? Yes. It is far. But we sure enjoyed the trip there. We went through Louisville, Kentucky, on the way to D.C. to see family (and spend the night…thanks, y’all!) and then on the next day to Alexandria. Now, I have a couple of things to say about that. Google routed us through a gorgeous piece of West Virginia. It was just spectacular, truly, and very worth all of the twisty mountain roads that we traveled. Also, our destination, Alexandria, was as cute as can be. We stayed in Old Town and it was just delightful. We would have enjoyed poking around in all of the little shops had we any energy to spare — which we didn’t, since we walked a thousand miles per day.

What follows is my commentary on our trip with lots of pictures. Sorry for the length, but my blog is how I remember…..

The first day we went to Mount Vernon.

Here we see #1 patting George on the head. Speaking of head, I would put a book on that child’s head if it would keep him from growing. The buster has taken my spot on the Barlow ladder and I don’t think I’m over it yet. In no time I’m sure that I’ll be looking up at 4 six-foot sons, thinking about how I’ll be consigned for life to the bottom rung. 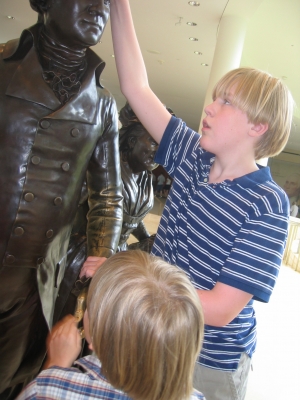 He wasn’t the only one checking out the statue of the Washingtons. Here’s Jon with Martha. 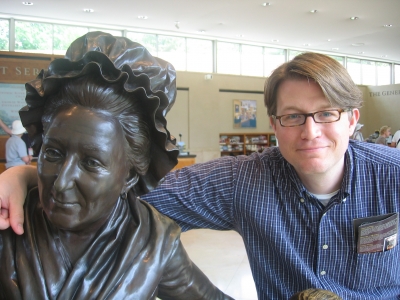 Did you know that they have a working blacksmithing shop on the place at Mt. Vernon? In it they make all the iron implements that they need on the farm. Here’s the smithy. 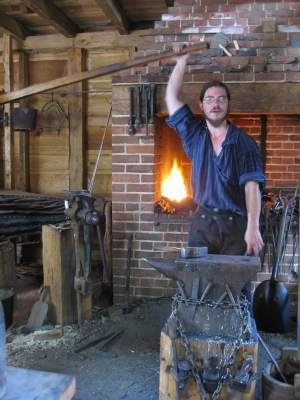 They had a place where you could stand and watch the smithy work while asking him questions. So, we stood. 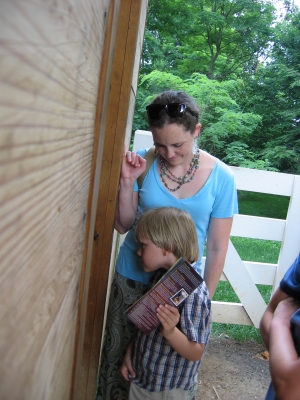 Many, many questions were asked by the Barlow males. In fact, I shepherded my folks over to the side after awhile, saying something about how I was sure that the folks behind us had questions too, to which the gal behind us smiled and said, “Nope, I don’t think I have any questions.” I suppose every possible question had been asked already.

Here’s the whole bunch minus me on the porch (or is it a veranda, I never know) that overlooks the Potomac. Well, all the bunch plus the Brit in red on the end. He was befriended by Papa Joe. Papa Joe always befriends someone. He has never met a stranger. I think, take that back, I KNOW that this trait skips a generation. In fact, I’ll illustrate that for y’all in a minute. 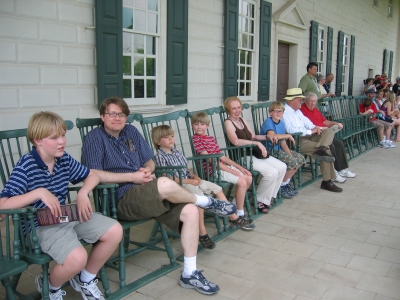 You know, the old Englishman doesn’t look very happy about being in my picture. Sorry, dude, I wanted a picture of my Papa. 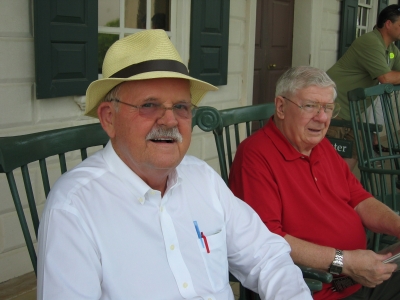 Jon and #1 on the porch. You’d never know these fellows were related, right? 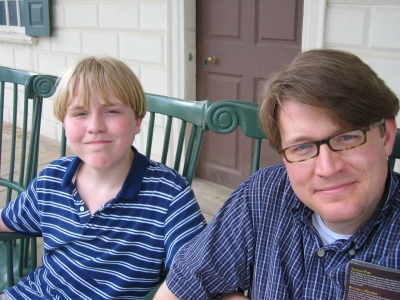 The next day we were off to the Natural History Museum. If ever there was a museum for us, this was it.

We love FLRs (funny looking rocks) and have them by the box full in the basement and elsewhere in the nooks and crannies of our house. So, did we like the big ole diamonds? Well, they were fine. But this rock was awesome. What a beautiful funny looking rock. 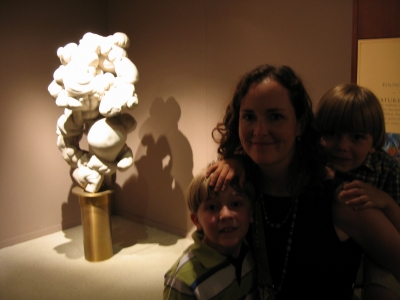 In addition to funny looking rocks, we love us some bones. 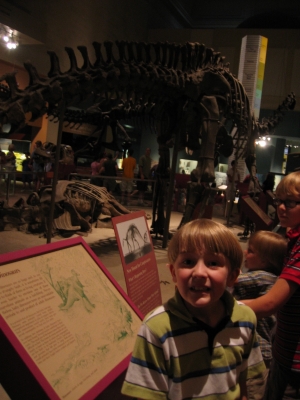 And, we particularly liked the way the way that many of them were displayed. 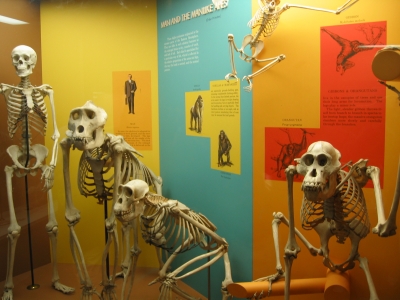 Some of the docents at the Natural History Museum were really great. I know that this guy was, because my #3 son (the one who would STILL be there in the presence of the dinosaur bones if he could) stood there and fired questions at the docent for, like, 30 minutes. This boy knows his stuff when it comes to dinosaurs. After we had maneuvered the escape of the docent (he probably had to take a break after that grilling), Mama Suzie, who had been there with #3 for the duration, said that she couldn’t believe how much #3 knew about dinosaurs. It’s in the crazy amount of knowledge category. 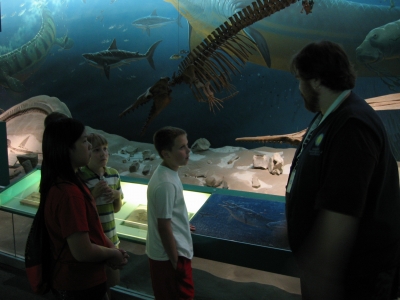 She did the awesome grandmotherly thing of taking him back there the next day. Mama Suzie was so much fun to have around during all of our sightseeing. When I’m her age it’s my goal to have the stamina that she showed while we were there. And, with all that, she had energy to spare. 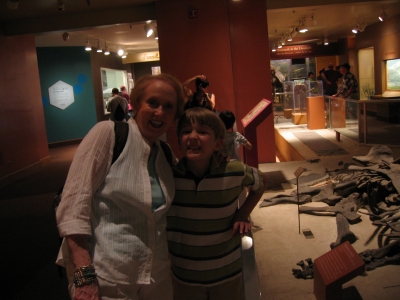 So, we’ve covered the son who loved the museum. This is the one who was along for the ride. 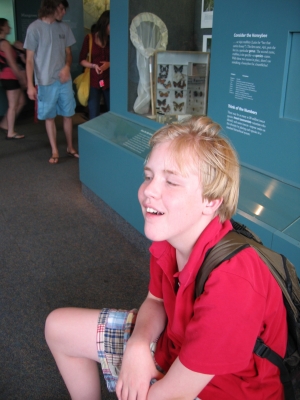 I must say, he was an excellent sport, gamely following us wherever we wanted to go. He does no complaining, that one. Somewhere in the insect area he had just had enough, though, and he decided to make this little tunnel his own. I didn’t blame him one bit. 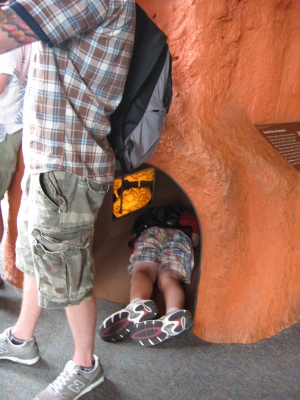 We packed a lot in that first day and decided to ride the metro back to Alexandria and then grab the car and some burgers and return to D.C. to see the monuments at night.

So, we were all sitting on the metro (sitting, hooray!) when some soldiers got on. Now, I know that this is common in D.C. since the Pentagon is a stop on the metro. But my youngest son hadn’t really seen soldiers before, at least in his memory, and so this sight really excited him. He asked me, “Mom, are those soldiers?” (You should know that he talks loud, really loud, and that everyone in our compartment heard him.) “Yes, E, those are soldiers.” He proclaimed, “I want to get their autograph!” And so he did. Remember when I said that the never-met-a-stranger-gene skipped a generation? 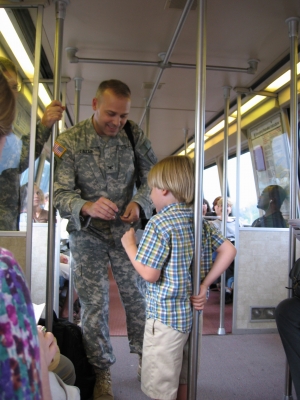 These soldiers, or I should say colonels, because that is what they turned out to be, were so sweet to E. They not only signed their autographs but they also gave him patches from their uniforms. They talked to him and he asked them questions (of course). And, you know when I said that E talks so loud that everyone in our part of the train knew what he was up to? It was funny, in that crowded train, everyone was listening in and they were smiling. Not just a fake or an isn’t-that-nice smile, but really amused, genuine smiles were smiled that day. It was kind of a cool moment. Leave it to E. On another note, I find it a little distressing at how young colonels are looking these days. Reckon that is what I get for getting older myself. 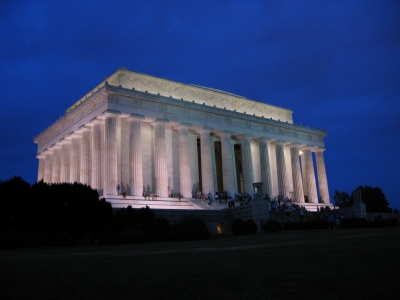 The monuments at night were really pretty. We toured the Lincoln Monument and the WWII, Vietnam and Korean War memorials. The Korean Memorial, in particular, was really impressive to me.

The next day we split up and some of our party went back to Natural History while others of us went on the search for some Calder Mobiles. We found them.

This is the problem with touring such an awesome place with so many free museums. You just know that you’re missing a ton of wonderful things. There are so many beautiful installations to experience and art to see. We all loved riding through the tunnel leading to the Sackler. I’m sort of an architecture junkie and that added one more layer of fun things to notice while we were there. 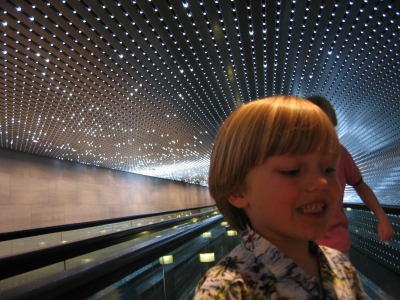 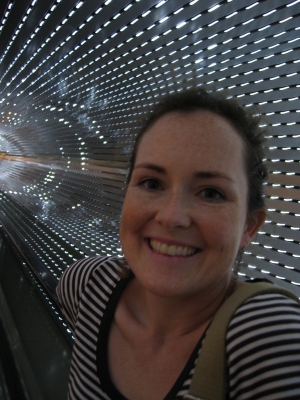 The title of the above image is Annie Needing Lipstick. 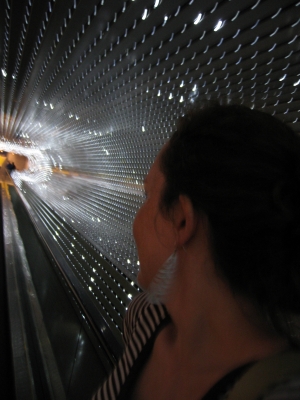 This post is getting lengthy, so I’ll forego describing any more of our trip. Maybe another day I’ll cover the blue painted naked women, the grumpy security, the Thai food we ate on our date, the Bureau of Engraving, the American Indian museum, the setting off of the museum alarm (twice), the yummy bagel sandwiches, the awesome fish at Eamon’s, how my youngest attempted to milk a pig, the hilarious, giddy-exhaustion-fueled dance someone did in a zebra printed robe, how Jon was so tired that fell asleep with a cracker in his mouth, tracking an injured hawk on the lawn of the Department of Agriculture, the Air and Space Museum, the geography shock that rocked Jon’s world and so much more.

Until then, here’s a picture of my mom and me with the boys. 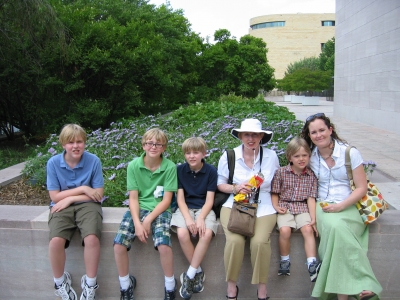 And here is what I saw the whole time we were there. 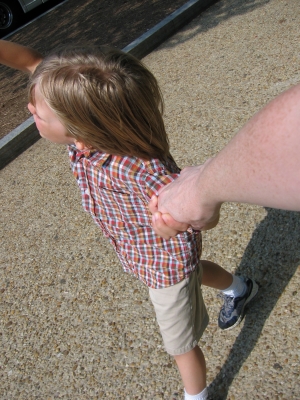 Washington D.C. — it was great. I hope that I don’t have to wait another 30 years before I see it again.